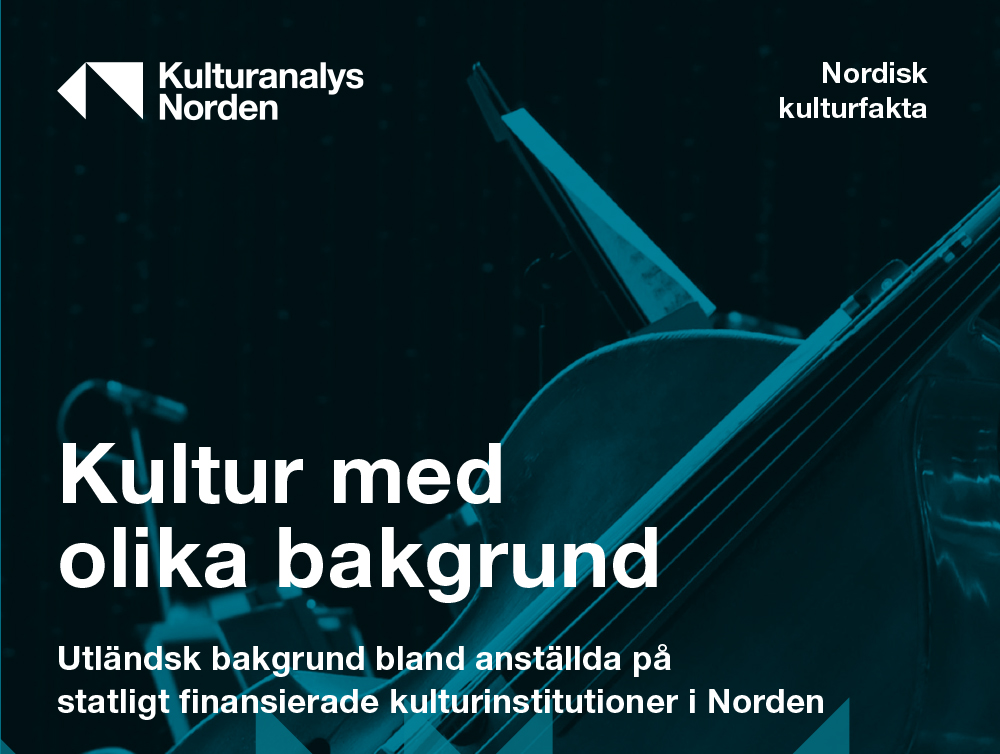 The proportion of employees with a foreign background to state-funded cultural institutions in the Nordic countries has increased over time, but the increase has not been at the same rate as in the general population. The representation of employees with foreign background has thus deteriorated between 2000 and 2015. The results are presented in a new report,  Kultur med olika bakgrund Utländsk bakgrund bland anställda vid statligt finansierade kulturinstitutioner i Norden (Culture with different backgrounds), by Kulturanalys Norden at  Myndigheten för kulturanalys.

You can read the report in Swedish here

Low representation of domestic-born persons with two foreign-born parents
One difference between the countries is that the percentage of employees who are
born in the respective country but have two foreign-born parents differs in size. In
Sweden, this group represents a comparatively high proportion of the entire group
of employees with a foreign background. In Denmark and Norway, the group is
significantly smaller, but is represented in all categories of activities. In Finland, it
is only in the performing arts area that there is a small number of employees from
this group. In Iceland, this group was not represented at all in 2015.

Western Europeans and English-speakers overrepresented among foreign-born
Among foreign-born, persons from Asia, Africa and Latin America are underrepresented in the survey population compared with the regular population, while foreign-born persons from Western European and English-speaking countries like the UK, USA and Australia are overrepresented. However, the differences between country groups have evened out over time. Foreign-born people from the Nordic region was the largest group in all countries except Finland in the beginning of the study period. By the end, the differences between the country groups’ proportion sizes had decreased, and foreign-born persons from the Nordic region was not the largest group in any country. In Denmark, Norway and Sweden, the proportions of the five groups were collectively between 15 and 25 percent. In all three countries, there is also a clear increase in the proportion of employees who were born in Africa, Asia, and Latin America. Finland stands out in that there is a dominance of foreign-born employees who were born in a nonNordic country of Europe and a smaller reduction of the group from the Nordic region than in the other countries. In Finland, where the percentage for a nonNordic country of Europe is about 45 percent compared to 10 to 20 percent for all other country groups, there is almost no increase in the proportion of foreignborn employees born in Africa, Asia, and Latin America. The Icelandic population is not suitable for analysis with regard to countries of origin as the number of employees with foreign background is so limited.

The low representation of employees with foreign background in the activities we studied when compared with the general population indicates that there may be barriers to integration in government-funded activities in the Nordic region. The countries all describe that cultural institutions play an important role in integration. If the government-funded activities we studied fail to achieve a representative level of persons with foreign background compared to that in the general population, there is reason to investigate whether there are any other obstacles to this, particularly in terms of management positions.

• that the Nordic Ministries of Culture collectively and the different countries individually, based on their general integration strategies, actively work to identify possible obstacles to government-funded cultural institutions in the Nordic countries in the long term being able to provide equal opportunities to everyone to get a job there.

• that the Nordic Council of Ministers decide to develop the statistics presented in this report and regularly update this as a type of indicator for how work with an integrated cultural life in the Nordic region is progressing.

• the international job market in the orchestra and performing arts areas

• the development of the entire job market for cultural practitioners, including those who are not publicly funded

• what recruitment looks like at the universities of the arts and other forms of education relevant for work in, for example, the museum sector with regard to foreign background

• what differences exist in cultural habits and cultural practice among children and young people with different backgrounds, what can be done to equalise any differences, and where this equalisation work can take place.