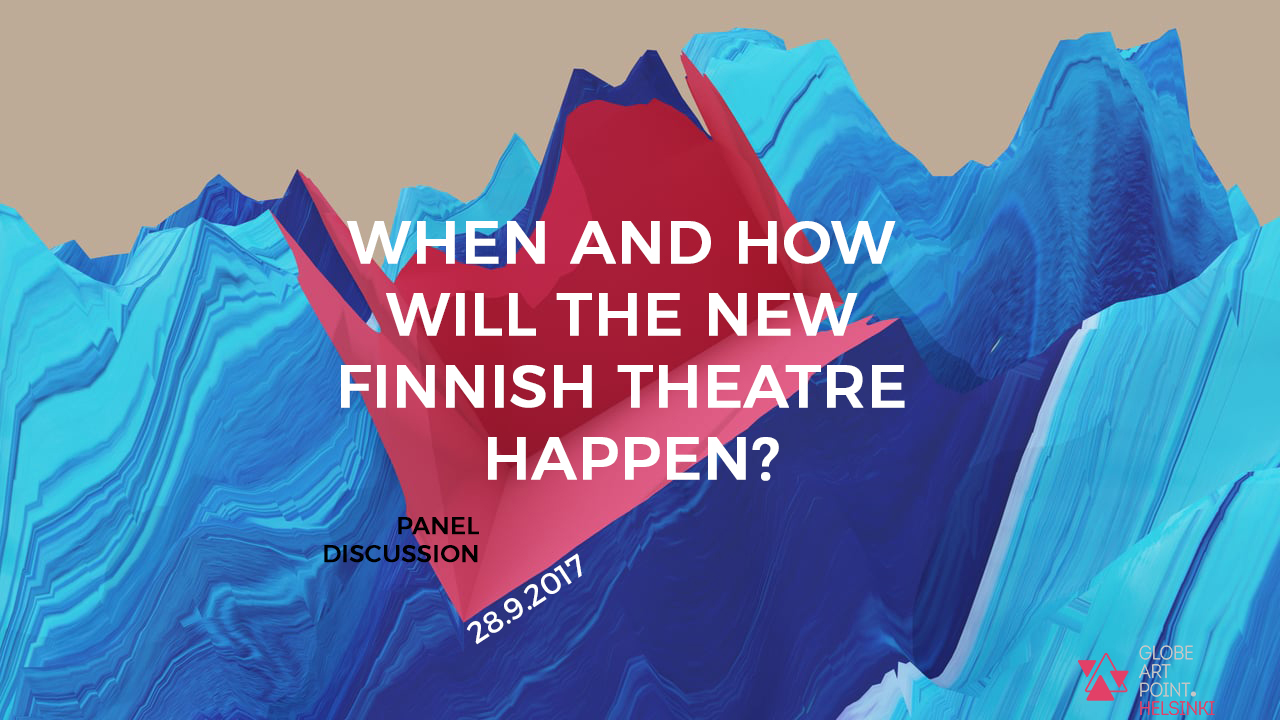 WHEN AND HOW WILL THE NEW FINNISH THEATRE HAPPEN?
Welcome to the panel discussion of diversity in Finnish theater.
Is there enough language or cultural diversity among theater-makers and their themes?
How about in education, audiences, venues?
As panel participants there will be both Finnish and international theater professionals like Davide Giovanzana, Essi Räisänen, Saara Turunen, Erik Söderblom, Irina Duskova, Maria Säkö, Martina Marti and Saara Turunen
This discussion will be held in English and moderated by theater director Martina Marti.
Date: 28.09.2017
Time: 18h
Place: Globe Art Point, Helsinki. Malminkatu 5 (Kamppi)
Free entrance.
Panel:

Davide Giovanzana is a theatre director born in Switzerland and living in Helsinki. He made his artistic Ph.D. in Theatre Academy of Finland in 2016. As a director, he has worked on several projects e.g. in Finland, Latvia, Russia and Switzerland. As a visiting researcher and pedagogue, he has worked in e.g. in UK, Latvia and Czech Republic. Giovanzana is also one of the founders of Helsinki-based Teatteri Metamorfoosi and the artistic director of the international MasQue Festival.

Erik Söderblom is a theatre director from Helsinki and he works as the director in Espoo City Theatre. He has worked as a director in numerous city theatres and opera productions, as the professor of acting in Theatre Academy and as the director of Helsinki Festival and Baltic Circle Festival. Among his latest directions are Dea Loher´s Oskuld in Viirus Theatre, Mozart´s Don Giovanni by New Generation Opera, Roland Schimmelpfennig´s Den gyllene draken in Sirius Theatre as well as the stage version of J.S.Bach´s Matteus Passio In Hämeenlinna Elenia Hall.

Essi Räisänen is a freelance theatre director from Helsinki. She works both in Finland and abroad on the fields of theatre and performance art. Her latest work Nightschool was premiered at Stage festival 2017 dealing with issues like change, future, and ecological crisis. Some of her latest works are Sotilaspoika (Lappeenrannan kaupunginteatteri, Kansallisteatteri, KOM, Stoa), Bonnie ja Clyde (Teatteri Jurkka 2016), Pelon maantiede (Avoimet ovet 2013) ja Amerikkalainen tyttö (Takomo 2012).  At the moment Räisänen works on several international projects with Klockriketeatern, Von Krahl Theatre, Suomen Kansallisteatteri and with actress Julia Rosa Stöckl with themes of change, ecological crisis, feminism, and fascism.

Irina Duskova born in Lithuania studied International Cultural Policy and Management at the University of Warwick. She works as the Watermill International Summer Program Director at Byrd Hoffman Water Mill Foundation, NY, USA, as the curator of the international program at Revelation – International Festival of Performing Arts in Almaty, Kazakhstan, and as a freelance project-manager in Helsinki, currently working for Klockrike Teatern. As a theatre manager, she has organized many tours for Finnish, Lithuanian and American theatres and performances, as well as managed several international theatre and dance festivals.

Maria Säkö is a dance and theatre critic, free journalist, non-fiction writer and the chairperson of the Finnish Critic´s Association.

Martina Marti is a theatre-maker and translator. Originally from Switzerland, she studied Drama and Theatre Studies in Canterbury and Paris and did an MBA with a focus on Arts Management. Along with her artistic work, she has worked as a festival programmer, an international project manager in the field of cultural mobility, as a producer and curator. Since 2006 she lives in Helsinki and works as a freelance theatre director and translator of plays.

Saara Turunen is a Helsinki based author and theatre-maker. She finished her MA degree in Theatre Academy of Finland in 2009 and completed part of her master studies in Barcelona Theatre Institute. There is a strong international dimension in her work. Her plays, The Bunny Girl and The Broken Heart Story have been translated into several languages and staged all around the world, and she has directed her own pieces for example in Spain and in Lithuania. In her latest works, The Love/Monster -novel and The Phantom of Normality Turunen speaks about the demand of normality and her contradictory relationship with her country. The Love/Monster earned the Helsingin Sanomat Literary Prize in 2015. Turunen was also granted with Finland Prize in 2016 by the Finnish Ministry of Education and Culture.