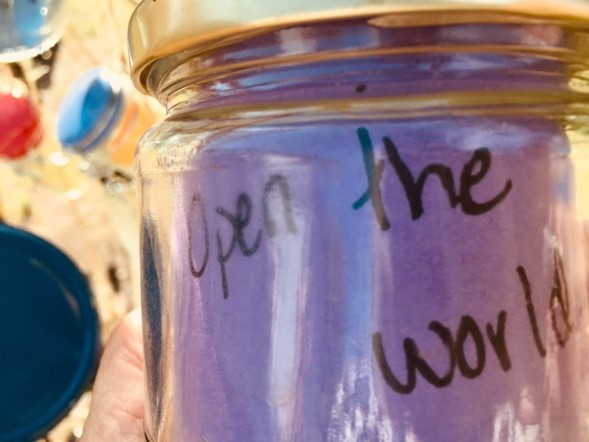 ‘The Forgotten Keys: An Artistic Team Experience’ by Jordy Valderrama

An artistic experience is always a very personal task. Artists know about the constant uncertainty and doubt of being mostly freelancers, and as far as I know, the risk of shipwreck or going for a walk outside the safe limits is a way to go. However, we artists love to throw ourselves into that well of uncertainty to immerse ourselves and discover some depth and meaning in the existence of humanity.

The beautiful and the ugly will tightly embrace each other to produce that moment of truth, that tight instant that seeks a connection between the creator/performer and the audience.

In the visual arts, such as painting and sculpting, line and color are used to convey the message, and even abstract forms can address the audience in a very personal way. When we use movement and music: dance comes to life and continues to be recognized as the oldest form of theatre. Later, when the word appeared on the stage, the Greeks made the spectators participate in the form of Chorus. I perfectly imagine on the stage of the Paraninfo theater of Dionysus, the god of wine and the forest, the one just below the Acropolis, the actors making the people participate in the party and getting them to repeat the verses they were addressing to the main characters to warn or praise them in their works. The theater is the party of the intellect, I think Brecht once suggested, and discussing this maxim with Master Stoyan Vladich, he suggests that it is rather “the party in which the intellect clarifies something”.

At the end of 2021 and until the first days of 2022, Globe Art Point did a call for artists of suburban art and with community art skills, I felt that my experience would fit there.

It was called GAP LAB Programme: Art Goes Villages, which was supported by the Swedish Cultural Foundation and would put artists in contact with some Swedish-speaking communities in the eastern Uusimaa region of Finland, near Vantaa where I live, specifically in the municipalities of Porvoo and Sipoo.

The time of the pandemic had been quite hard on my savings and I was happy to embrace the path of recovery, although it is always uncertain to work with new colleagues that one does not know, the interesting thing was that we came from different origins and countries and that this experience would serve to recover from confinement.

The concept: “We welcome interdisciplinary ideas and an open attitude to new or unforeseen”  was very appealing to me, more so as the process was supposed to be open to public scrutiny.

However, when we started with our first Zoom meetings, which pandemic times popularized and normalized, an immense number of questions crowded my mind, my documentation process and brainstorming became a torrent and my capacity for synthesis, of which I normally boasted, was crushed by my inability to quickly propose “something concrete that the whole team would like”.

The colleagues were very patient although not so prolific, or they were busy with their own projects, which made me think that some of the many ideas that I launched would catch on with the common taste and outline a course. Nothing further from what happened, one by one the ideas fell apart for one reason or another, however I stubbornly pursued to find a transcendent meaning to whatever we chose, a content pertinent to the tortuous times that we had gone through due to the pandemic, something with depth. The message had to be, in my opinion, to contextualize the experience that had left us all stunned and locked up for almost two years and more because we had the dogs of war barking at the door of this nation.

The fact that the cities of Porvoo and Sipoo and their villages were part of the event added its own charm and the discoveries were astounding.

Coinciding with our experience there was a stupendous display from the Helsinki Museum about the Nikkilä Psychiatric Hospital in Sipoo municipality. It was established by the city of Helsinki in 1909 and closed in 1999. There many patients died during WWII, some from hunger in the terrible White Winter between 1941 and 1942, but in those days pandemics also visited them brought by patients assigned there escaping from the bombings that threatened Helsinki. A documentary video emerged from this visit and later another one about the information compiled in the city of Porvoo.

From the end of March (the 21st exactly) I suggested a single document to record the process and to share it with anyone interested in the experience, which was the Laboratory’s original idea. Links, proposals, and ideas receded like a flood, then other documents appeared offering a great diversity of proposals and angles. Finally, in a face-to-face meeting, we managed to find the thread of the skein, the one that led us to achieve: The Forgotten Keys. After considering many names, we chose this one, and we agreed that we would make an installation whose main attraction would be a personal experience for the participants of these communities and the surrounding villages, although aesthetically it was still unknown what would happen.

Solving problems is something that artists are used to, more since diversification, or strategic thinking, as defined by Ansoff’s entrepreneurship matrix, is something that favors this problem solving, but commonly we artists call it: Creativity. But this won’t drop out from the sky, you have to dedicate countless hours of work and reflection and more than anything to take action, before arriving at the workshops that we had scheduled, which consisted of a long 45-minute one and a short one that we called: Pop-up workshop.

In the first ones, we could make the group break the ice and get ready for a state of alert that would allow them to be able to express themselves freely and exchange ideas with the group with which they shared the experience. In the short ones they had to be fed with short and accurate instructions, almost like in a fast food meeting, that would allow them to feel that they could effectively be part and center of a work of art in progress, the result proved to be full of contents and emotions.

The experience of choosing, the exercise of free will is, in the words of F. M. Alexander, the supreme human inheritance. In fact, inviting someone to choose something is always attractive. So that was the appeal for passing citizens to participate. Each one was asked to choose a key from the many different ones that we had (getting them was a headache, but since they are falling into disuse due to electronic keys, we managed to collect more than 350). Then, once the key was chosen, the participant was asked to imagine a door. The dimensions, material, and place where it was located were freely chosen, but the key could open that door. Behind it there would be something that needed to be released, shared, or given to the world. An object, situation, animal, or person that needed to be available in the universe. Once this was done, they were asked to choose one of the many coloured cards that we offered them, and to write on it that they had chosen. Some of us artists asked that on the back of the card also be written what we should get rid of, what there should be less of and that the same key could put away. Afterwards, the key was tied to a rope and the other end was placed inside a glass jar with the card and its message inside. Finally, the key and the jar hung from a “tipi” or stick structure where they again chose where to staple their artifact. The “tipi” solved several problems of the installation, since we did not invade trees or parks, which was originally our idea, and made it something transportable too, thus creating an installation capable of traveling. 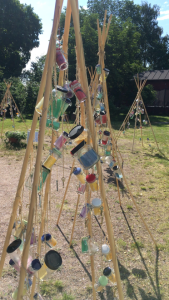 However, the creative problem solving was not the centre of the creation, but the experience itself. These workshops challenged us and put us in contact with various types of audiences: from vacationers who paused to browse our proposal, to infants accompanied by their families or tourists who contemplated smiling the “tipis” standing in parks, to others more diverse. Like elderly people in wheelchairs, who gathered around them longing to return home or happier times. Holding the card close to their hearts, they later deposited them hoping that their mother would hug them with emotion. This last group aroused in us a great tenderness and the memory of them will not dissipate so easily. Equally, or more moving in some sense, was our meeting with the Ukrainian refugee community that was relocated to Porvoo. Three long workshops with them allowed us to perceive the fragility of the human condition in the face of war. The first group were children between 6 and 10 years old, and even though it was not numerous, they managed to leave us with the taste of the ephemeral and the delicious tenderness that does not depart when you are a child, even in the most extreme situation. The second group, youngsters between the ages of 11 and 18, managed to laugh for a moment and forget what had brought them there. However, when preparing their messages, they mentioned the enemy, but referring to him as “mister”. The group of Ukrainian adults was made up entirely of women. In my distraction, I asked the monitors why this was, they replied that the men were not allowed to leave Ukraine. Trapped far away from their families, which had somehow put up in a safe place. The messages that all these groups generated were printed on the cards and were trapped in the glass jars, revealing the universal desire for change, and telling us about the will of the people.

When I opened the jars, weeks later, to make a statistical record of what had been deposited in them, I felt that the desires were really released again and propelled into the world, and although many of them had been erased by weather and humidity, those that I registered, about 20% of the 700 writings, were photographed, attesting that the simple things gives us the opportunity to be happy; and that some of them turn out to be more moving due precisely to the simplicity that they contain, in an idea such as “a world with more games” or a drawing of a child, or “swimming in the summer”, or the simple “love and be happy” in the best of cases in an adult, or locking up the cold winter, along with indifference and selfishness and make disappear what overwhelms the world and always wish the best in return: Peace and Love. 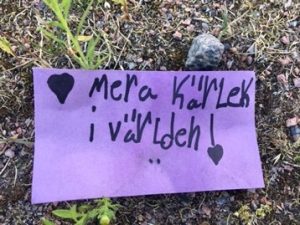 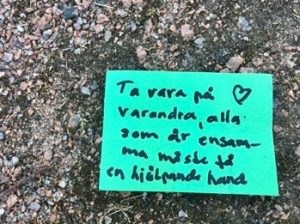 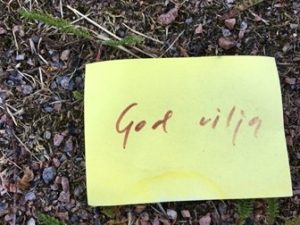 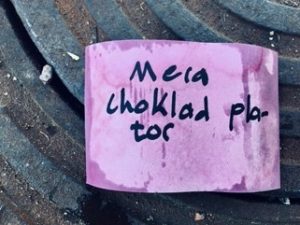 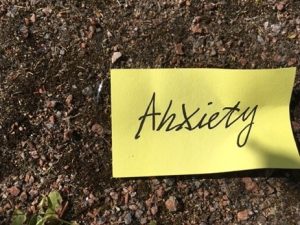 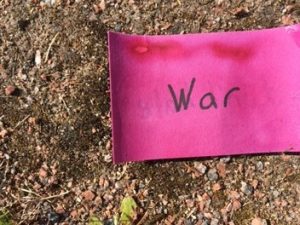 Formed as a mime, actor, dancer, and puppeteer. Jordy Valderrama produces directs and writes adaptations for theatre, dance, circus, and puppets shows. Professor Valderrama is also a LicensedTeacher of Art Education with a major in Dramatic Arts and graduated in 2017 at Haaga-Helia University of Applied Sciences in Finland as a Vocational Teacher (Ammatillinen Opettaja -AmO) Pedagogue by the Finnish National Agency for Education. He has widely taught, directed and performed Mime, Circus, Dance, Puppets, and Drama at schools, universities, and educational institutions for the last 35 years.