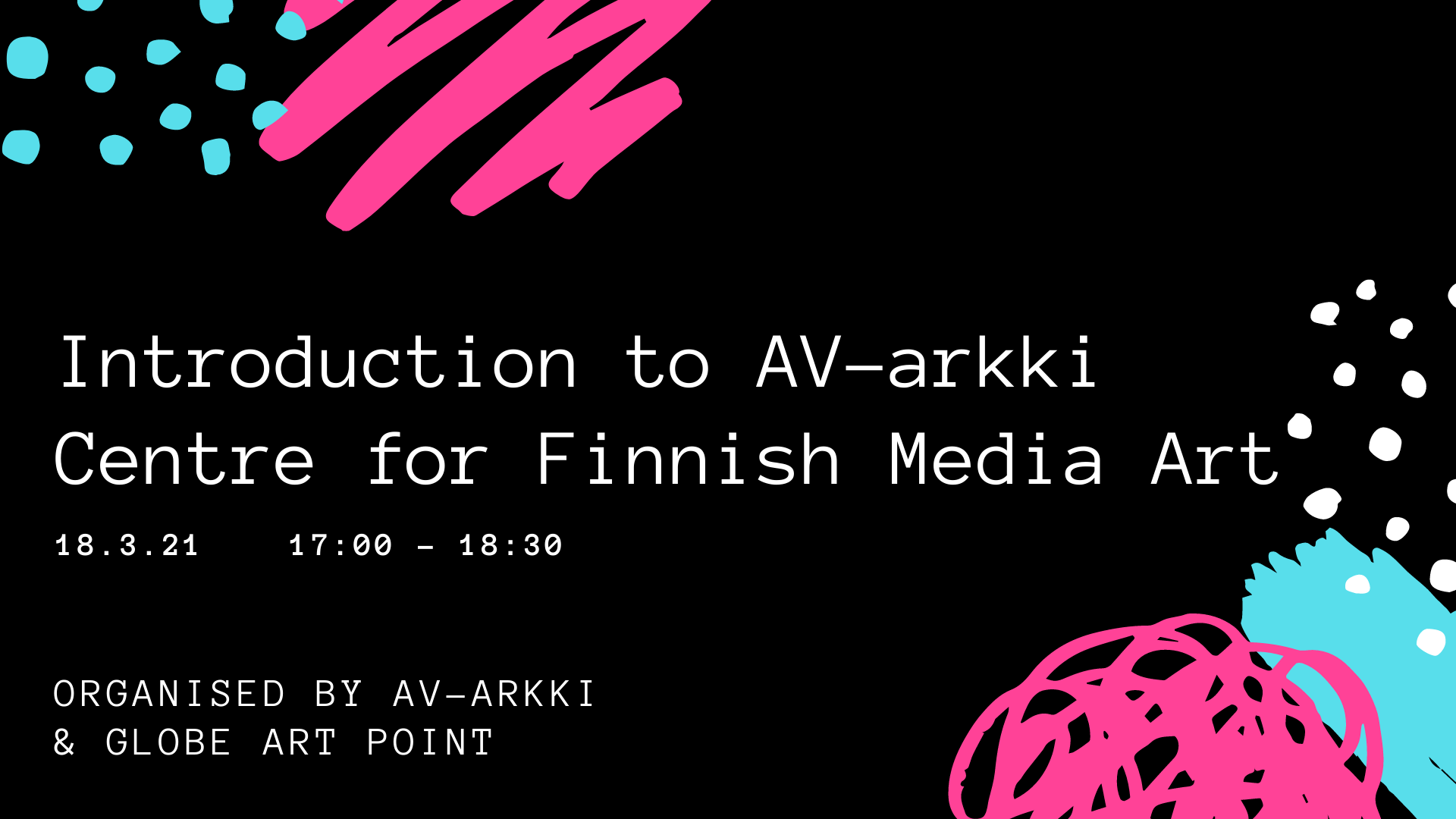 Introduction to AV-arkki, Centre for Finnish Media Art is an online informative session for Finnish and Finland-based media artists organised by Globe Art Point, in collaboration with the AV-arkki association on Thursday, 18 March from 17:00 to 18:30.

During the session, a program coordinator of AV-arkki Tytti Rantanen will discuss the following:

In the second part of the event, GAP’s board members Sepideh Rahaa (vice-chair) and a film programmer Diego Ginartes will share their personal experiences from working with the AV-arkki association.

The informative session will be concluded by a discussion during which the audience will be invited to ask questions (The participants can submit their questions in the event registration form, or share them live via Zoom).

The language of the event is English.

This is a free event but the participation is bound to registration.

The event is being planned online on Zoom and it is not going to be recorded or streamed live on social media. The registrants will be provided with detailed information about the event and with the meeting link by email on Tuesday, March 16, 2021.

ABOUT THE GUEST SPEAKERS

Tytti Rantanen (b. 1985) has worked as a program coordinator of AV-arkki, Centre for Finnish Media Art since March 2016. She takes care of the distribution and practivities of AV-arkki, operating both with festivals, museums and other venues and AV-arkki’s member artists. In addition, Rantanen is a researcher, critic and curator focusing on experimental film and artists’ moving image. She is finalizing her PhD on French experimental film and literature in the 1960s and the 1970s (University of Tampere).

Sepideh Rahaa (1981, Iran) is a multidisciplinary artist, researcher and educator based in Helsinki. Through her practice she actively investigates/questions prevailing power structures, social norms and conventions while focusing on womanhood, storytelling and everyday resistances. Currently she is pursuing her doctoral studies in Contemporary Art at Aalto University. Her research interests are representation in contemporary art, silenced histories, decolonisation, feminist politics and intersectionality, collaboration, global social justice, and critical race studies. Her aim is to initiate methods within contemporary art for creating spaces for dialogue. Since 2015, Rahaa has been actively participating in debates and taking actions regarding the art politics in Finland by being a member at Third Space Collective, Globe Art Point (board 2016) and Nordic Network for Norm critical Leadership (2018) among other collaborative projects. She holds a BA in Painting and Visual Arts, MA in Art and Research from Shahed University of Tehran and a second MA in Fine Arts and contemporary art at Aalto University. Her artistic practice combines different disciplines, including film and video, performance, painting, poetry and photography. Her work has been exhibited and screened in Europe, Asia and West Asia (politically known as the Middle East): Iran, Taiwan, the United Kingdom, Spain, France, Norway, Sweden, Estonia, Germany (Berlin), Latvia, Lithuania and Finland.

Diego Ginartes (Spain, 1983) is based in Helsinki. He works as artistic director & film programmer. He holds a MA in Contemporary Film and Audiovisual Studies, University of Pompeu Fabra and Visual Arts from University of São Paulo. Since 2016 he has been the director of Cinemaissí, Latin American film festival in Finland. He founded New cinema/New talents, a platform to encourage emerging filmmakers with risky and unconventional cinematographic proposals. As a film programmer, among other projects, he curates the screening series Other/Cinema, produced by the research group Critical Cinema Lab from Aalto University and is part of short movies programming team of Tribeca Film Festival.

AV-arkki is a non-profit artists’ association. It was founded in 1989 and now has over 250 Finnish or Finland-based artists as its members. AV-arkki’s main purpose is to distribute Finnish media art to festivals, events, museums and galleries within Finland and internationally.