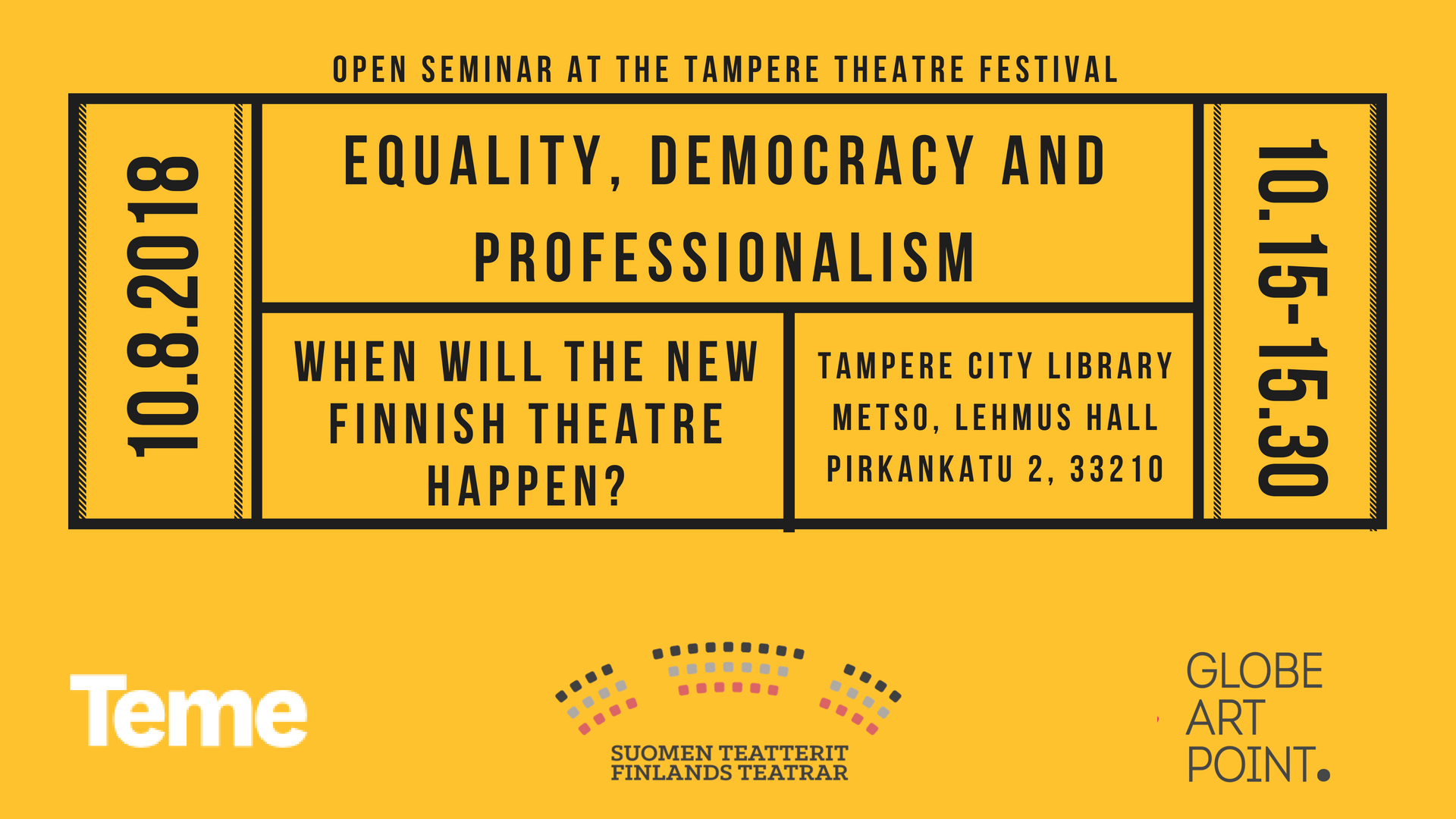 Association of Finnish Theatres (STEFI), Globe Art Point and Trade Union for Theatre and Media (Teme). The seminar is free of charge. The morning session will be held in English and afternoon in Finnish.

Note: You can watch the videos from the seminar HERE

Part I – Osa I, In English (englanniksi), moderated by Martina Marti

David Kozma is Romania-Hungarian actor and theatre director. He graduated in 2001 from Babes-Bolyai drama department. In Romania he worked as a permanent actor in the Andrei Muresanu Theatre and in the Figura Studio Theatre as well as performing in television. After moving to Finland in 2006 he has played among others in Ryhmäteatteri and in TV series and films. His latest direction was Meganin tarina by Tuomas Timonen in Valtimonteatteri in Autumn 2017. As actor his latest work is in TV serial Tarinan metsästäjät which was premiered in YLE 1 in June 2018. He established European theatre collective in 2007 and the R.E.A.D. Reading European Drama festival in 2014.  David Kozma is Globe Art Point´s chairman and a board member in Finnish Actor´s Union and Arkadia -seura of the Parliament of Finland.

Erik Söderblom is a theatre director from Helsinki and he works as the director in Espoo City Theatre. He has worked as a director in numerous city theatres and opera productions, as the professor of acting in Theatre Academy and as the director of Helsinki Festival and Baltic Circle Festival. Among his latest directions are Dea Loher´s Oskuld in Viirus Theatre, Mozart´s Don Giovanni by New Generation Opera, Roland Schimmelpfennig´s Den gyllene draken in Sirius Theatre as well as the stage version of J.S.Bach´s Matteus Passio In Hämeenlinna Elenia Hall.

Martina Marti is a theatre-maker and translator. Originally from Switzerland, she studied Drama and Theatre Studies in Canterbury and Paris and did an MBA with a focus on Arts Management. Along with her artistic work, she has worked as a festival programmer, an international project manager in the field of cultural mobility, as a producer and curator. Since 2006 she lives in Helsinki and works as a freelance theatre director and translator of plays. At the moment she works as a diversity trainer in Culture for all services.

Necati Öziri is a playwright and dramaturg. He studied philosophy, German studies and literature in Bochum, Istanbul, Olsztyn and Berlin. He received a scholarship from the Heinrich Böll Foundation and taught formal logic at the Ruhr University Bochu. Öziri was dramaturg at Maxim Gorki Theatre in Berlin for four years and the artistic director of Studio Я until season 2016/17. His debut play Vorhaut (published by rowohlt) premiered in October 2014 at the Ballhaus Naunynstrasse and his latest theatre play “Get Deutsch or Die Trying’” was staged by Sebastian Nübling at the Maxim Gorki Theatre and invited to Heidelberger Stückemarkt. Since 2017 he is head of the International Forum and co-curator of the program Shifting Perspectives at Berliner Festspiele’s Theatertreffen.