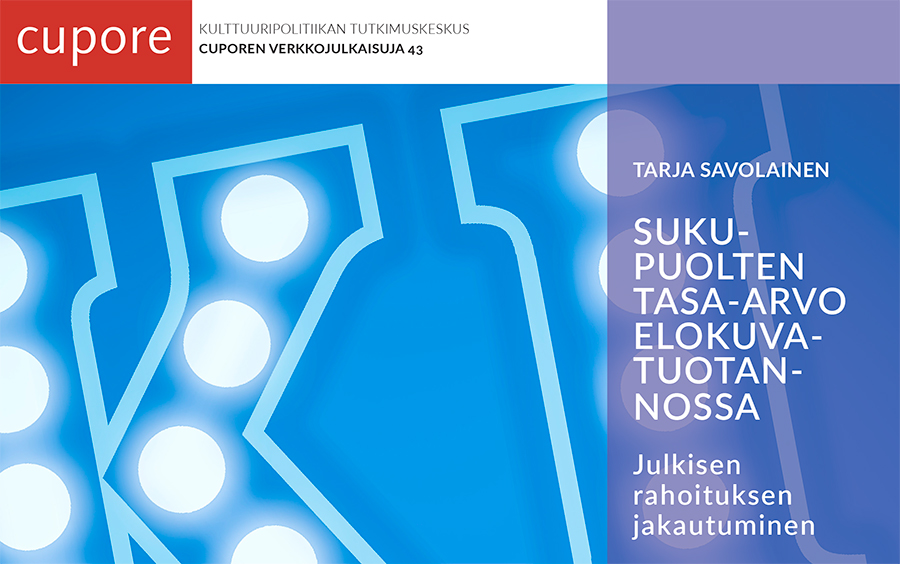 Only about one-fifth of Finnish feature-length fiction films are directed by women. The situation has not changed since the mid 1990’s. One reason presented for this consistent imbalance lays in women filmmakers´ difficulties receiving funding for their films.

The purpose of the report was to find out whether gender equality was realised in the public financing of Finnish film. In addition, factors that may cause gender inequalities in film production more broadly were evaluated.

The statistics created in the study were based on information from five organisations: the Finnish Film Foundation (2011—2015), the Nordic Film and Television Fund (NFTF) (2012—2015), the Promotion Centre for Audiovisual Culture (AVEK) (2011—2015), the Finnish Broadcasting Company (YLE) (2011—2015), and Arts Promotion Centre Finland (Taike) (2013—2015). The organisations gave us data on their financing decisions. Taike provided us with existing statistical tables. In addition, eight female filmmakers and eight film commissioners were interviewed.

Gender equality was approached as a question of financial resources: do women and men receive an equal amount of public financial resources for their films? Public resources referred to funds originating from the state budget. Some of the organisations also get funding to a small degree from other sources.

The Finnish Film Foundation is the main supporter of Finnish film. It is a private foundation which operates under the guidance of the Ministry of Education and Culture.  The Ministry grants the Foundation its yearly support and operational funds from lottery and pools funds allocated for the promotion of cinema in the state budget. The other main financier is the Finnish Broadcasting Company YLE, which commissions audiovisual productions from independent production companies and finances films. The other organisations of the study had clearly fewer resources for financing films.

Women film artists and films directed by women got about one fourth (24 %) of the amount. Respectively, films directed by men and male film artists received three fourth (74 %) of the total. Thus, women clearly received less public financial resources for filmmaking than men. In this sense, gender equality was not realised. When the women’s share of public film financing was proportioned to the share of women among film artists (43%) and to the number of women educated in film (estimated to represent about one half), the situation was still very imbalanced.

The analysis showed that women and men got grants for scriptwriting in the same proportion compared to their share of the applications. However, the grants for women were on average a little smaller than the grants for men.

The Finnish Broadcasting Company YLE financed films and TV drama series with about 46 million euros in 2011–2015. Films and TV series directed by men received 79 % of the total amount, while films directed by women received 18 %. All the productions that YLE had commissioned from independent companies were directed by men. However, there were both female and male scriptwriters and producers in these TV series.

The Promotion Centre for Audiovisual Culture funded short films, documentaries and animation films with about 4 million euros in the analysed period. The funding was divided rather equally among the genders.

Arts Promotion Centre Finland awarded about 2.4 million euros to film artists as grants in 2013—2015.  62 % of the sum went to men. The share of women was about the same as their overall proportion among film artists in Finland.

The study also indicated that the financing organisations do not report how the money is awarded per gender.

It was proposed that the valuing of film protagonists and stories according to gender might be one central factor that creates divisions and inequality in film production.

One of the main suggestions was to create a database that would enable the monitoring of public film financing and the evaluation of gender equality. In the forthcoming research, the careers of film directors should be analysed in more detail.